Why More and More Engineering Firms are Using Drones 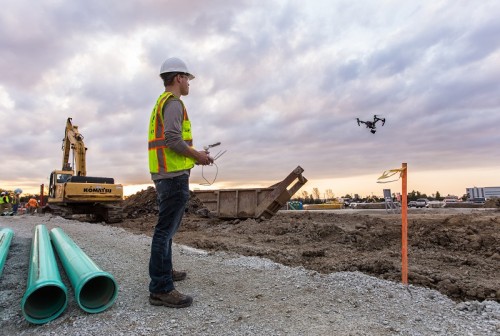 Drones are everywhere. Look up when you’re walking in a park, or sitting on a beach, and you might catch one buzzing about. Commercially-available drones can fly up to 100 miles per hour. And ready or not, they’re going to be delivering packages to your doorstep very soon. They already can deliver pizza.

This technology can be traced back to 1907 when the first quadcopter was created by inventor brothers Jacques and Louis Bréguet. However, it couldn’t be steered, only lifted two feet off the ground and needed to be steadied by four people. We’ve come a long way.

Commercial drones hit the market in 2006 but at first very few permits were requested. One likely reason is that drone rules from the FAA were ambiguous and drone operation was expensive: companies were required to hire a licensed pilot to fly an unmanned aerial vehicle. New guidelines for small commercial drones went into effect in 2016, and there are now more than one million drones registered with the FAA, including 122,000 for commercial use.

Some newer commercial drones are no longer limited to following a GPS signal and can also now track the movement of people, animals, objects while avoiding obstacles.

In the last five years, more and more engineering companies are using drone technology to be more efficient and accurate, collect better data faster, and save money.

Some say construction is slow to adapt to technology. In fact, most construction and engineering firms wait for competitors to adopt new technology before they do. But the rate of new technologies being developed is increasing rapidly and is changing everything.

For civil and structural engineering, in addition to 3D mapping, drones are a useful tool for documenting a project site before, during and after construction. Structural engineers can use drones to inspect structures such as building faces that are not accessible.

Drones have been embraced by companies ranging from startups to the giants, and some would say they are now essential to construction.

The use of drones isn’t limited to just construction sites — they’re also used for scanning pipelines to improve operations and reduce safety risks; making surveying safer and more accurate; or even to take aerial photos of a prospective job site before a bid.

While learning to use a drone is simple, the technology isn’t for every company. Along with the associated cost and training, drone mapping can also be technically difficult.

In the coming year, drone use for the construction industry is expected to grow. At the same time, privacy concerns about drones are growing.

The future of drones is very much up in the air, as countries around the world come together to figure out how this technology should be regulated.

Has your company started using drone technology? Let us know what you are using drones for and any benefits and/or challenges.